We have had an incredibly busy year with campaigns here at Animal Justice Project. Take a look!

1st November was World Vegan Day. Hopefully many of you joined us for our online event featuring activism discussions, sanctuary stories, an exciting raffle and a secret action.

I gave a live talk all about the campaigns and investigation work that we have carried out over the last 12 months, since World Vegan Day in 2019. We hold a vast array of events, on the streets and online, plus have a wide variety of campaigns, but I will cover what our major focuses have been over the past year.

We focused on the ‘free-range’ myths of chicken farming in a blog that was featured in Vegan Life magazine, following our investigation at an RSPCA Assured chicken farm.

We launched our ground-breaking undercover investigation at Gressingham Duck – the UK’s biggest duck producer. They control over half of the British market and kill eight million ducks each year. They also farm and kill turkeys and geese. Gressingham Duck are Red Tractor Assured, and remain so to this day, despite us discovering major breaches. This company represents the stark reality of the duck industry in the UK.

We filmed over a period of two months and secured national media coverage. This was not surprising given the sheer horrors that we found. Ducks were roughly handled by workers, grabbed and thrown by their delicate necks. Others had their necks snapped, their flapping bodies thrown amongst the other crowded ducks. We found many ducks who were injured or dying. It was commonplace to see ducks stuck on their back, unable to right themselves. There was sodden bedding, no enrichment, lack of natural light and artificial lighting was kept on for extended periods of up to 47 hours at a time. There were many breaches but Red Tractor have kept this farm on, as have major supermarkets, including Ocado, Morrisons, Waitrose, Tesco, Sainsbury’s, Co-op and Asda.

We launched a second investigation just a week later! This time as Pasture’s Poultry, a small, family-run and ‘free-range’ farm. They boast about being a ‘gold star’ farm. They raise, kill and sell chickens, turkeys, ducks and guinea fowl. This company reflects what people call the ‘higher welfare’ or ‘more ethical’ side of the meat industry. Our findings found the complete opposite. Again, we had national media coverage in the week before Christmas as our findings were so horrific.

Turkeys and guinea fowl were plucked alive, as not enough time was left after having their throats cut. Chickens entered scalding tanks alive and flapping. Birds were handled with such force, it caused immense distress. We filmed turkeys in a pen who were able to view their friends being taken one by one, hung up and killed. They had nowhere to go. They were all raised in filthy and dilapidated sheds.

Buzzwords such a ‘gold star’, ‘free-range’, ‘family-run’ truly mean nothing to animals.

We launched an online action against Bloom & Wild, a florist who had teamed up with Gressingham Duck. We managed to get them to not promote their competition any further and hopefully never work with this abusive company again.

Following the huge momentum of our investigation at Gressingham Duck, we took to the streets of Nottingham and Reading, giving out over 100 free take-away bags in each city. Each bag contained vegan ‘duck’ pancakes, a fortune cookie with our The Foul Truth URL inside, plus our leaflet with our investigation findings.

Our Campus Without Cruelty campaign highlighted the horrific experiments that take place at the University of Nottingham, who had a staggering 25% INCREASE in experiments in 2019 compared to the previous year. Many of the experiments on guinea pigs included those funded by charities such as Action on Hearing Loss and those paid for by the Medical Research Council – effectively using taxpayers’ money.

We joined the International Online Rally for Animal Rights, which reached over 80,000 people! We focused in on our The Foul Truth campaign and had many of our supporters send in photos in solidarity with messages about ducks.

We also joined the global action thanking researchers who are rejecting animal experimentation, specifically covering Covid-19 experiments. Later in the month, we joined in with an online discussion regarding animal experiments with groups from around the world. This was in replacement of World Day for Animals in Laboratories (WDAIL), which sadly could not go ahead due to the pandemic.

We were due to protest the abusive Wing Fest event in Bristol (and later in Manchester and London throughout the summer) but due to Covid-19, their events were cancelled. We seized the opportunity to turn these into online rallies! We hosted a special day where we urged people to contact Wing Fest with our pre-written letter and on social media to urge them to drop the abuse and go plant-based. We also used targeted adverts, which reached people who had interests in ‘higher welfare’ or simply people who liked to eat chickens, to show them the reality of chicken farming. We reached nearly 60,000 people with our adverts!

In the midst of a global pandemic, we launched our EXPOSED: Cost of a Pandemic campaign and kicked off the start of our TWELVE weeks of online rallies. We lobbied George Eustice and Boris Johnson to urge them to stop bailing out animal exploitation industries – the very reason that the pandemic began. We ran these events alongside the twelve-week ‘Milk Your Moments’ campaign by the UK government and the dairy industry to urge people to consume more dairy products. We also targeted the fishing industry in the weeks of World Oceans Day and World Fishing Day. We sent out 24,000 messages to Boris Johnson!

Following the huge ongoing success of our EXPOSED campaign, we launched part two: Farming for a Future. This part of the campaign urges the government to implement plant-based initiatives that are accessible to all. We provided case studies and examples of both current plant-based initiatives, including the Vegan Society’s ‘Grow Green’ campaign, as well as showing people who have successfully made the switch. Check our Kumar’s story and Hof Narr’s!

We headed to Gressingham Duck to finalise our petition against the abusive conditions inside their duck sheds. Along with 20 local activists, we handed in our petition of nearly 6,000 people!

Since February, we had been working on a major undercover investigation to expose the British beef industry for the first time! Importantly, we highlighted the major integration of the dairy and beef industries and how they are both reliant on each other for selling and sourcing calves to fatten.

Our EXPIRED campaign focused on Berryfields Farm – a beef ‘mega farm’ – rearing 4,500 individuals each year. We also filmed inside an industrial-scale rearing farm – Badgers Cross farm in Somerset – where calves who were just weeks’ old were abused and mistreated by the farms’ workers and owner.

At the American-style ‘mega farm’, conditions were even worse. Cows were painfully left for months to suffer with overgrown hooves and horrifically lame feet. Others had open wounds left untreated. No fresh bedding, mounds of faeces, deep slurry; conditions were diabolical. Workers abused the calves, hitting, punching, slapping and kicking.

Since our investigation, this farm has lost major contracts from third parties, as well as being suspended by many supermarkets and their own slaughterhouse! Red Tractor pulled their assurance but, as with all investigations, gave it back to them soon after. This again shows that Red Tractor and other assurances schemes continually fail animals.

This was a first in the UK as we investigated not only a beef farm and a ‘mega farm’ but also showed that DAIRY = BEEF. 50-60% of the current British beef herd are made up of male dairy calves – the two industries have integrated into one.

We protested outside Berryfields twice with over 60 activists! We have made our voices loud and clear against this abusive and sadistic industry, and our EXPIRED campaign will continue to highlight the cruelty within it until it ends.

In other campaigns, we signed TWO open letters relating to pandemics and animal exploitation, as well as writing a speech for the national Animal Rebellion actions in London.

We collaborated with many local groups to host an event in Salisbury that highlighted the cruel warfare experiments carried out at Porton Down – a government facility. This includes experiments relating to Covid-19. They experiment on animals, including pigs, ferrets, marmosets, rats and mice. Over 70 activists attended a spectacular stunt in the town centre, followed by a candle-lit vigil outside the gates of Porton Down itself.

For our Exposed campaign, we had posters go up in Nottingham, London, Brighton, Bristol and Cardiff! Our messaging was clear and bold: ANIMAL EXPLOITATION = PANDEMICS!

With the reinstatement of Berryfields Farm by Red Tractor, we hosted an online rally targeting both to highlight how assurance schemes fail animals time and time again.

We have some exciting and ground-breaking plans for 2021, and we could not carry out such vital and effective work without the help of our incredible supporters! By sharing our investigations, signing our petitions, donating, fundraising and attending our events, you have helped us grow Animal Justice Project into the group that we are today! We are able to take on industries head-on and expose never-seen-before hidden exploitation. Together we can be a powerhouse for animals everywhere and help lead the way to a vegan future! 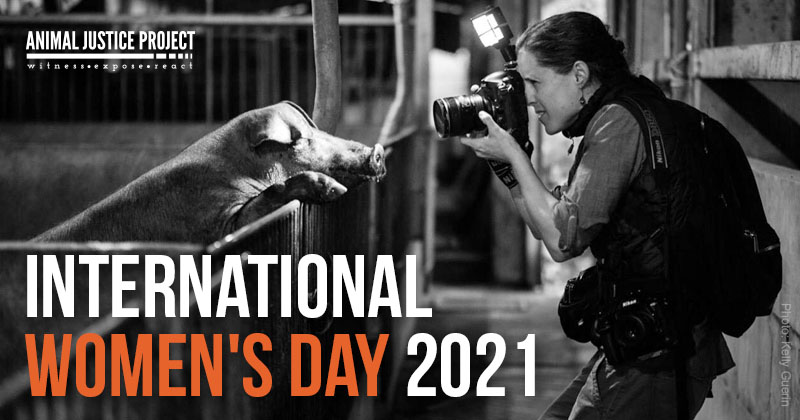 Meet the women on the front line of animal rights activism! 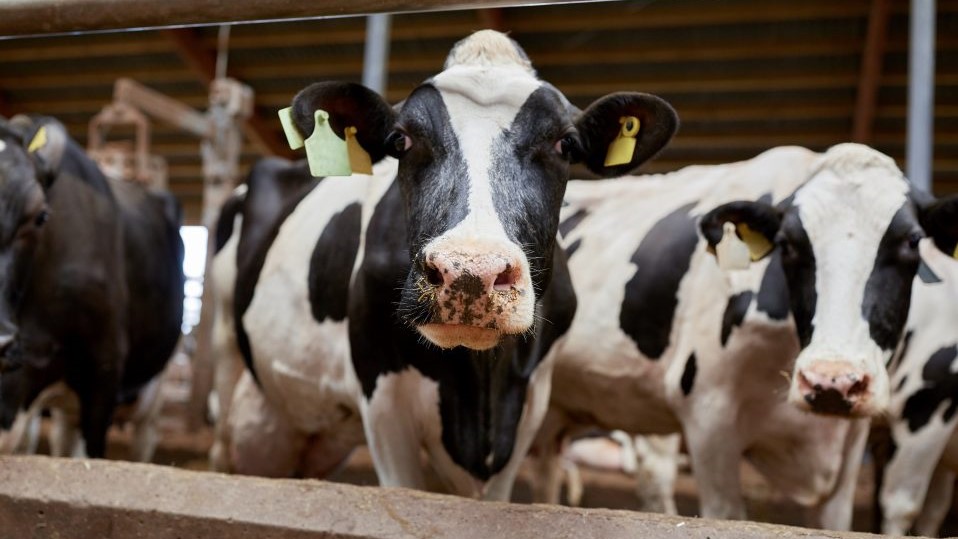 As January ends, we celebrate the incredible 250,000 people who signed up to Veganuary 2019! 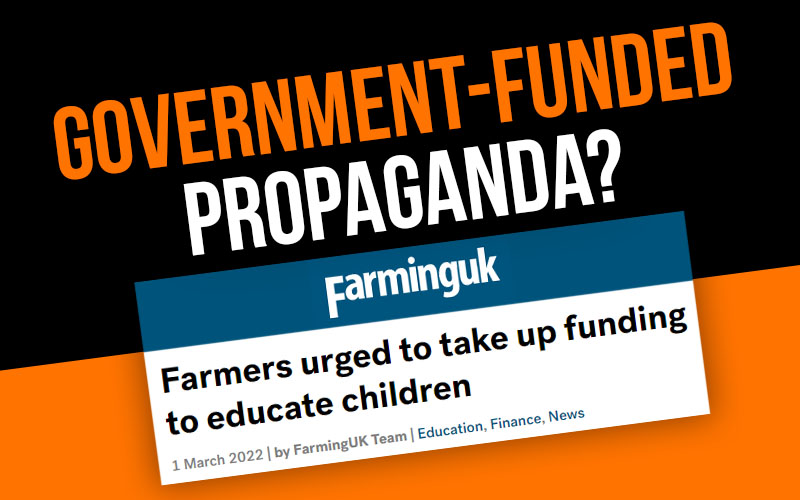 Farmers in England are being urged to apply for funding to ‘educate’ children about where their food comes from. 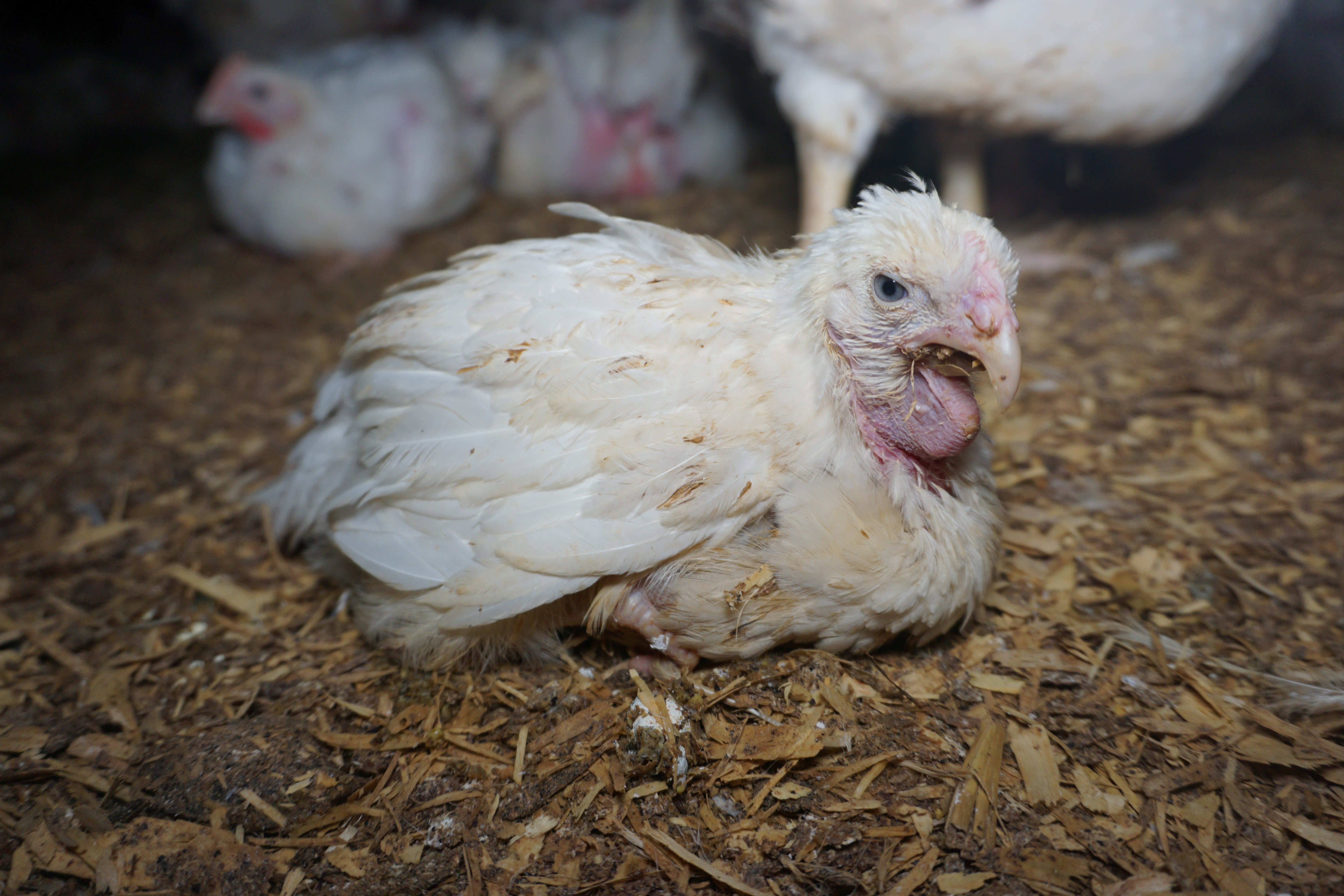