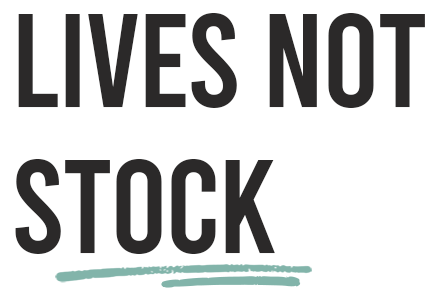 OUR 'LIVES NOT STOCK' CAMPAIGN FOCUSES ON ANIMAL TRANSPORTATION, BOTH DOMESTIC AND LIVE EXPORTS.

EXPOSING A HELLISH INDUSTRY THAT IS RARELY INVESTIGATED, LIVES NOT STOCK SHOWS TRANSPORT JOURNEYS FOR WHAT THEY REALLY ARE: TRAUMATIC EVENTS THAT TAKE AWAY AN ANIMAL’S AUTONOMY.

The distress and suffering caused during transport journeys is taking place every day, passing you by on the motorway or ending up on the supermarket shelf.

WHAT IS ANIMAL TRANSPORTATION?

Most animals will need transporting at one time in their lives, whether that is for their own benefit or not. Animal transport is simply moving an animal from one location to another. Animals like cats, dogs and rabbits are routinely taken to groomers or vets. Aquatic and zoo animals are taken against their will, between facilities, and even after being captured from their natural environments. The most prevalent animals on the planet are those who are farmed for food, and, as a result, most animals transported globally are being exploited in the farming industry. They are often moved between farms and to slaughter.

More than 70 billion land animals are farmed and killed every year, with the majority being broiler chickens – those raised for their meat. This unconscionable number results in a lot of transportation. Whether chickens are transported from five weeks old to their slaughter, or pigs are moved from farm to farm for breeding purposes, the journeys are traumatic and highly distressing. Injuries and deaths during animal transport are commonplace and normalised.

HOW DO THEY TRANSPORT ANIMALS?

The method of animal transport is dependent on species and age. Through welfare guidelines, each species of farmed animal must be transported under specific conditions, including varying headroom allowance and stocking density. Guidance, though, is commonly breached. The way that animals are transported is designed to create a practical, profitable system, instead of considering the best interests of the animals.

Large animals, like pigs, cows, sheep and goats are loaded into single-tier or multi-tier animal transporters or trailers. Large transporters, often used for journeys to slaughter or for live exports, can be three tiers in height and are often equipped with self-regulating control systems. This includes temperature controls, ventilation fans and monitoring alarms. These systems do very little to make transport journeys actually comfortable or stress-free. Birds are thrown into plastic crates that are stacked onto the backs of lorries, usually eight crates high, with each lorry transporting as many as 10,000 birds. This includes chickens, ducks and turkeys.

HOW DOES TRANSPORT AFFECT ANIMALS?

Transport is one of the most distressing times during an animal’s life. From being loaded with unfamiliar animals, to how loud and scary the actual journey can be, transport can cause animals a lot of suffering and trauma. Dehydration, injuries and fatigue are common during these arduous journeys, whether they last half an hour or over a period of days. As animals panic, their heart rates can become rapid and their stress responses kick-in: their blood cortisol and lactate levels increase. As animals are loaded and unloaded, abuse from workers is common as animals are treated as mere products. This is seen all too frequently during undercover investigations like our RSPCA Assured transport investigation. As pigs and tiny piglets were shocked with electric goads, the immense distress that they faced became clear. The workers continued, worsening the trauma. Find out more about this RSPCA Assured abuse:

The statistics speak for themselves. In 2021, there were over 1.26 MILLION non-compliances during transportation. Non-compliances are breaches of transport legislation and include animals being transported with broken limbs, in emaciated conditions and with prolapses. The Food Standards Agency, the governing organisation that collects this data, admits that this is an underestimation of the true extent of the issue. In the same year, almost 62,000 animals DIED during transport to slaughterhouses. Their journeys were so distressing, or their conditions were so poor before being loaded, that they couldn’t survive a drive that typically only lasts a few hours.

The psychological torment facing animals during transport is unfathomable and cannot be underestimated. Animals are loaded with others who they are unfamiliar with, are often shoved or kicked by the people loading them. They are put onto a metal trailer that is loud, cold and full of unknown smells, or into a plastic crate rammed full of other birds. This takes a massive toll on the animal, whose stress responses heighten. The animal’s family or companions are often separated from them during this process, adding to the traumatic event.

With the numbers of animals transported being so high, individual care is not taken for each animal who is loaded onto a truck. Catching machines are often used for chickens, launching them at speed into plastic crates, causing unknown injuries to their already frail bodies. Pigs and sheep are herded onto trailers en masse, with smaller or lame animals getting trampled or further injured. With so many animals comes a lot of faeces. During loading, large animals like cows often fall down on slippery faeces-coated concrete floors or metal ramps.

On longer journeys, if they are not given adequate rest stops, animals can be left starved or dehydrated. This is likely to happen if food and water is already withheld from animals before loading. For example, chickens will often have their feed taken away many hours before loading so as to not ‘waste’ feed (that would be stored in their crops and not promote their putting on weight); farmers aim to maximise profit on every single animal.

Heat stress is a major concern during transport, especially for pigs. Pigs lack the ability to sweat, apart from via a few sweat glands on their noses. They rely on behavioural adaptations to thermoregulate themselves: panting, seeking shade, laying on cool surfaces, wallowing in mud and avoiding contact with other pigs. Unable to perform these vital behaviours during transport (and usually on the farm too, before being loaded), pigs are vulnerable to heat stress that puts their lives at risk. High humidity can worsen the problem, through lack of adequate ventilation, as it reduces pigs’ ability to use evaporative cooling like panting.

Animal transport legislation in the UK

Animal welfare legislation in the UK is supposedly well covered, especially when it comes to animal transport. There are two main laws that are designed to ‘protect’ animals during transportation: The Welfare of Animals (Transport) (England) Order 2006 and Regulation (EC) No 1/2005.

This piece of legislation aims to prevent unnecessary suffering to animals during transport, and includes regulations for transport vehicles including temperature requirements, navigation systems and temperature monitoring.

Notably, it states that:

“It is an offence to transport any animal in a way which causes, or is likely to cause, injury or unnecessary suffering to that animal.”

Yet, this describes a large proportion of animal transport journeys, as backed up with the non-compliance data that the UK government itself records. So, why are animals continuing to be transported in this way?

This Act, under the European Parliament, has continued to oversee the welfare of animals during transport since Brexit. The UK government has plans to amend and adopt the Act into law. It covers transport requirements for each species of animal and its enforcement. This piece of legislation was part of a European action plan to improve animal welfare for transport animals and aims to prevent injury or undue suffering.

Through undercover investigations like our RSPCA Assured pig investigation, and by looking at government data reflecting the number of reported injuries and deaths during animal transport, it is clear that these pieces of welfare legislation do not, and never will, protect animals. Prospective Bills such as the Animal Welfare (Kept Animals) Bill, ultimately, will not help animals either. By only moderating the level of stresses inflicted upon animals during transport, it completely disregards the rights of the animals and their own autonomy.

Most major supermarkets have guidelines under which animals cannot be transported for longer than eight hours, in line with short journey regulations. With the proposed changes in upcoming legislation, there will be very little practical change for those animals travelling under eight hours, which includes nearly all animals transported for supermarkets. For example, Asda, Tesco, Morrisons, Aldi and Lidl hold policies to preclude journeys longer than eight hours. For Morrisons, 100% of their pigs are transported on journeys of 8 hours or less.

What can you do?

As a consumer, a lot of power is in your hands. Animals are not stock. They have the right to their own autonomy, and this includes the right to not be transported against their will from farm to farm or be violently killed in slaughterhouses. As animals scream in terror inside transport trucks on motorways, don’t turn away. They need your help. The best way that we can help animals is to be vegan and stop funding this barbaric industry.

Every single investigation is vital to ending animal exploitation and to creating a better, more compassionate world for all animals. Give today to drive the change.